This is the Bearded Vulture in Khunjerab National Park. Just as its name suggests, it looks like a vulture with a beard.

The Gypaetus barbatus is also known as the lammergeier, which are a large bird of prey that makes up the only one in its’ genus Gypaetus and is most closely related to the Egyptian vulture（Neophron percnopterus）, and with the Palm-nut vulture（Gypohierax angolensis） they form a subphyla of the vulture subfamily. The tail is a rare diamond-shaped one, uncommon among raptors.

These bearded vultures feed on carrion, mainly bone and marrow. Small bones are swallowed whole, and digested by strong gastric juices. Larger bones that have lots of marrow are dropped from the sky, to break them apart and make them easier to consume.

This time, I saw a bearded vulture dropping a bone at Khunjerab Pass (around 4,600m). It may be hard to see because it’s quite far away, but I got a video of its behavior.

The Lammergeier dropping a bone from high above: Bone crasher!

The bearded vulture is a large bird with a total length of 115 cm and a wingspan of nearly 3 meters. Sometimes I am so overwhelmed by its size when it flies right overhead.

The bearded vulture as it descends along the cliffs of the Khunjerab River.

The Lammergeier found a carcass of an ibex on the banks of the river and perched on a rock nearby. It must have been frustrated that it couldn’t get into the narrow riverbed, since its wings might not fit into the space.

For observation, photography of wildlife, birds of Pakistan, please contact us, Indus Caravan. 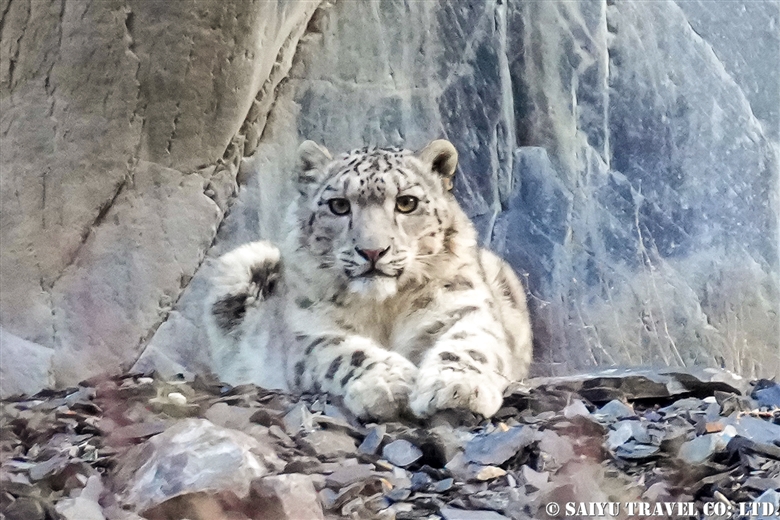 This April, our snow leopard tour in Pakistan was excellent with great sightings! However, I was really saddened to see some marmots carrying garbage into their burrows at the Khunjurab Pass. On May 4, with the support of our tour participants, Abul Khan and the village of Moorkhun’s Boy Scout group, we cleaned up the trash around the Khunjurab Pass. Even if you ask the government to do something about the trash, we cannot expect a prompt response. It will still take some time to shift the culture and awareness about properly disposing of waste for the domestic Pakistani tourists. This season, we are planning to do two more cleaning activities again.

It was heartbreaking to see the hungry marmots, since they just work from their hibernation, eating the trash left behind by people. 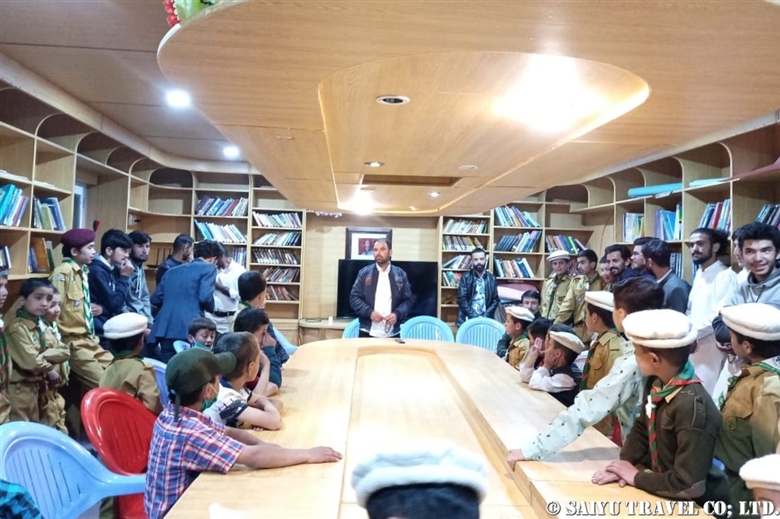 Mr. Abul at the community hall in Moorkhun village, giving an orientation about the cleanup activities. 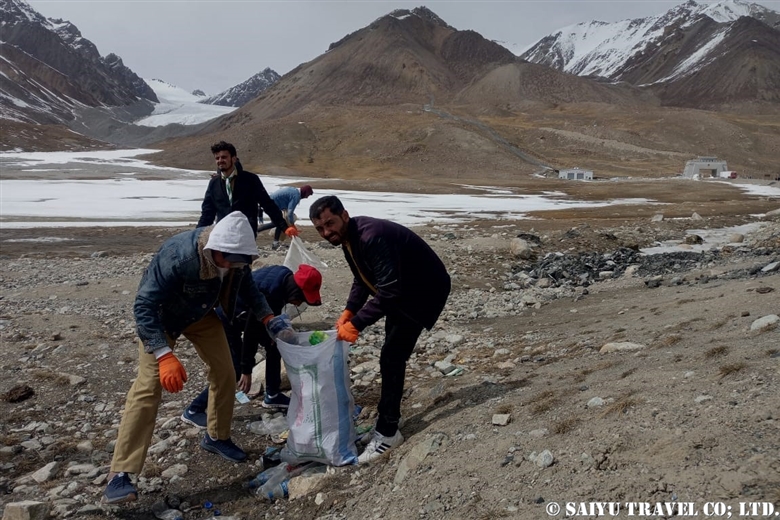 The most trash that is left behind is in the area near the border with China, which is the final destination for many of the tourists. Working at altitudes above 4,600 m, this work requires the cooperation of locals. 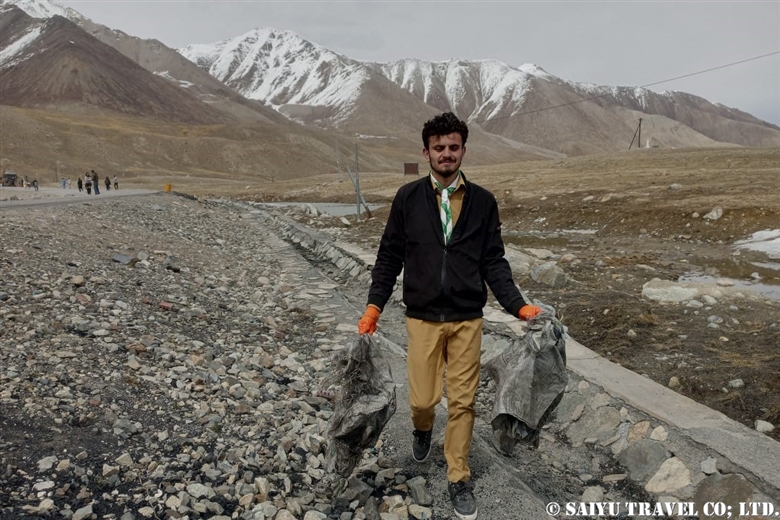 Cleaning along the ditch next to the Karakorum Highway. Snack wrappers, PET drink bottles, diapers, masks, etc. were all strewn about. How can people be so careless to just throw garbage out of their vehicle window? 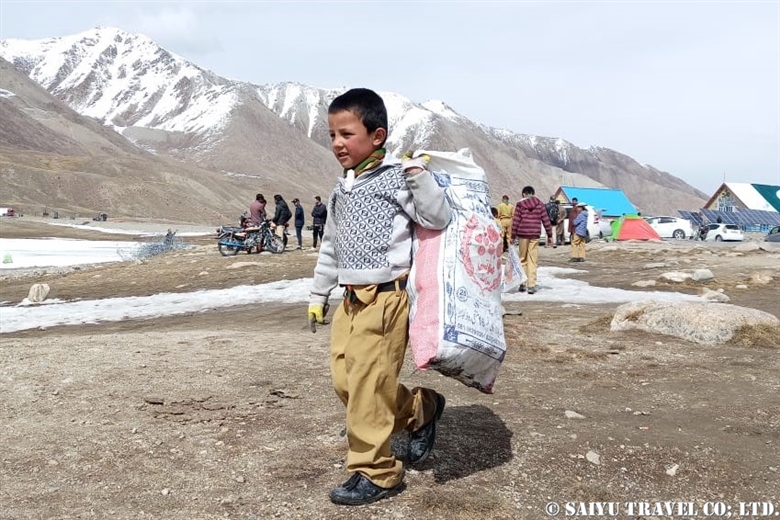 A child that participated in the cleanup efforts. 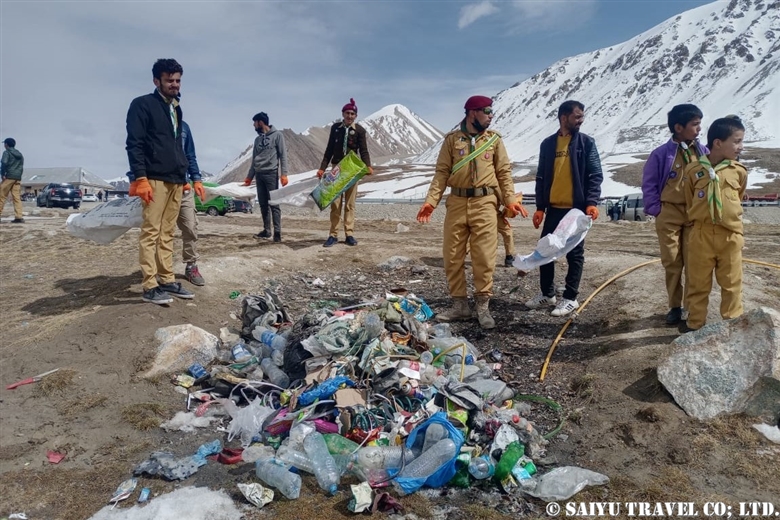 This year we would like to conduct two more clean ups, one before and after the season. We still have a chance to regain the beautiful nature as it once was. In order to protect nature and amazing wildlife environment of the Karakorum Mountains, also called the “ridge of the world,” and the Pamir Plateau, I would like to do my best to protect it.

This is the Vlog for the Snow Leopard Spring Expedition, April, when we had a great sighting of a snow leopard. We were on the recently melted snowy slopes near the Khunjerab Pass there the animals waking up from their long hibernation appeared. There were long-tailed marmots, along with predators like red foxes and the birds of prey from above, as well as herds of yak moving north, making their way to the highlands…and of course, the snow leopards. It is such an irresistible season for wildlife lovers.

Considering all the hardships we have faced so far, I was filled with gratitude for this tour.

This is a continuation of our morning sighting of the snow leopard mother and cubs, as we followed them for the day.

When we first saw the leopard family, they had been feeding on the ibex that the mom probably killed for breakfast until we disturbed them. Then we could find them again on the nearby mountain slope, not far from their prey. At first, they were laying on the slope, but then as the day got hotter, they moved around into different spots of grass and then, into the shade of the rocks. They did not spend the entire day sleeping, but instead I could sense that they were struggling to find a cool spot to rest.

The video below, of the leopards below was taken during the day, very far away from them.

Snow leopards during the daytime

Then, finally, came the long-awaited for sunset. At first, the family of three were staying in the same place, but by the time evening fell, they went their separate ways. The mother snow leopard began walking towards the leftover ibex that was killed that morning!

It looked like the mother snow leopard was telling us “Hurry up and go!” as she was just out of reach from her precious kill. The cubs looked on at the scene, from the rocks above. As darkness fell, their time begins again.

It was an amazing opportunity to be able to spend the whole day watching snow leopards.

This is a report from the Spring Snow Leopard Expedition. The event happened when we only had two more days left in the trip. While driving through Khunjerab National Park, we saw snow leopards at a very close proximity. It was a mother with 2 cubs as they were feeding on an ibex carcass.

Of course, the snow leopard mother and cubs were surprised by our appearance, and scampered to the edges of the cliff. The encounter lasted for about 3 minutes, and we were all silent, with just the sounds of the clicks of our cameras making noise.

After they disappeared over the ridge, we decided to continue to look for them for the rest of the day, adjusting our location to see if we could see them from a different angle.

We had an encounter with a sweet pair of snow leopards at an altitude of 4,500m near the Kunjerab Pass. I am certain for this time of year, it probably isn’t a mating pair but maybe a a two-year old child and its mother.

We were observing and shooting photos from a distance of about 1 km away, so thanks to the long-distance sighting, we were able to see them in their full natural behavior.

The Karakoram Highway, which runs through Khunjerab National Park, exceeds 4,000 meters from Koksar and then makes a steep rise to about 4,700m around the Khunerab Pass. Just as we were climbing the extreme slope, we encountered this snow leopard as we turned the curve.

While we were driving, Mr. Hussain, who was looking for wildlife from the window suddenly directed the driver to “Back up a little” and he said “There is a snow leopard, very-very close, perhaps hunting its prey.” I couldn’t find it right away at all. Even though he said “Its close. Its right there” but to me I have no idea “how close” he was referring it might be…I was really resenting my bad eyesight.

Finally, I could see it, the snow leopard! It was maybe 50m or more…? It was facing away from us, so it was well camouflaged. As I learned later, there was an injured yak below this rocky outlook, and it was investigating the yak. This was the first photo, before it even noticed us.

Noticing our vehicle, Mr. Hussain suggested quickly “It will be gone soon. Better get your photos now.” It was such a fortunate encounter for us to see this rare snow leopard!

…and in less than 10 seconds, it disappeared from sight.

The ibex had already sensed the presence of the snow leopard and looking in that direction where it had moved to. The herd were all gathered together and already on high alert.

This herd of ibex were looking towards the snow leopard for a while, but eventually moved closer to our position and sat down, facing us. It felt as if they were asking “Please, if something happens, help us out?”.

In the spring, as the snows melt away from the mountainous slopes of the Khunjerab National Park, sitting at 4,000 meters above sea level, the wildlife also seems to spring back to life.

In this video, the red fox catches a mouse. The classic fox hunting technique of locating, jumping and diving into the snow, nose first. Then the prey seems to confuse the fox by “playing dead” …an interesting sighting of the wildlife in the thawing Karakoram.

In mid-April, you can see the long-tailed marmots sunning on the slopes of the highlands over 4,000m near the Khunjerab Pass. During my 9-day stay, it seemed that it was just after the hibernation period, and the number of marmots continued to increase day by day.
They are such cute marmots in their burrows.