We had an encounter with a sweet pair of snow leopards at an altitude of 4,500m near the Kunjerab Pass. I am certain for this time of year, it probably isn’t a mating pair but maybe a a two-year old child and its mother.

We were observing and shooting photos from a distance of about 1 km away, so thanks to the long-distance sighting, we were able to see them in their full natural behavior.

There are many rock engravings which can be seen on the Indus River (Gilgit River/ Hunza River) basin in northern Pakistan, especially along the rocky shores from Shatial to Hunza, where the number are said to exceed 50,000 drawings.

The oldest ones date back to the BC, depicting hunting scenes and of the Alpine ibex, and with newer “Rock Paintings” that were carved by passing merchants, pilgrims and invaders who were all traveling on the Silk Road. On the banks of the Indus River around the Chilas area, is a sort of “Rock Carving Gallery.” When leading a general tour, I point out the carvings that were made by passing Buddhists but this time, I searched specifically for “snow leopards etched on the rocks.”

This is the scene of “Snow Leopard hunting the Alpine ibex” which can be seen from the Karakoram Highway, not far from the Chilas Shangri-La Hotel, a hotel often used by the foreign tourists.

Sometimes, the local people who dislike the images of Buddha paint over them with a lime-like substance. These are washed off and cleaned in a way as to not damage the rock carvings. 。

The ears and body have a very wolf-like shape, but the long and thick tail shows that it is a snow leopard.

The rock carvings along the Karakoram Highway have been considerably damaged by being painted over by locals. However, on the opposite riverbank across the bridge, there was considerably less damage and we could find some rock carvings in good condition.

A pagoda is depicted in the image. Early etchings were carved using a hard stone, but those of the Buddhist pilgrimages era are more delicate using more precise carving tools. The pilgrims aiming for “Gandhara,” who would have carved the image of the Buddha and the pagoda, may have been waiting out a high-water event along the Indus River, crossing here once the water levels dropped.

Not only Buddhists, but various people from different ethnicities and religions have crossed this area. This is perhaps a drawing of a person who has killed an Alpine ibex, possibly a person from Central Asia?

And…over here, on some materials they describe this drawing being of a “mythical creature,” but it is the same as the horns of the Markhor!

A rock face with various pictures engraved on it.

It is a bit hard to make out, but it looks like a snow leopard is attacking its prey!

And on this one, it is even harder to see, but this depicts a snow leopard attacking an Alpine ibex on a cliff. It is a rare design where the artist drew the “cliff” on a rock canvas.

On the right is an ibex, and on the left, a snow leopard.

This time, I walked around for 2 hours, and could find 3 snow leopards etched in the rocks.

Unfortunately, the rock carvings in the Chilas area will be submerged by the Diamer-Bhasha Dam Project, which will be completed in the next few years. I have heard that some of the more famous rock carvings will be relocated, but most of them will be lost forever.

The drawings of wild animals etched by these ancient people are a lasting sign of their civilization and proof of that era. Isn’t there a way to conserve these somehow?

※This article was uploaded in May 2021 to http://www.saiyu.co.jp/blog/wildlife/ 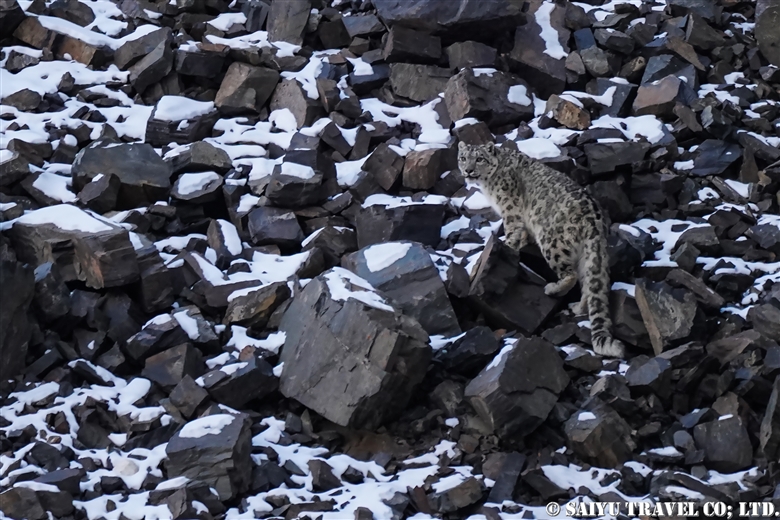 We arrived in Northern Pakistan in search of the snow leopards. While traveling on the Karakoram Highway, we observed the ibex and the vultures.

In Khunjerab National Park, there are many footprints on the roads and in the snowy fields of the river. On the Karakoram Highway, I also found traces of snow leopards after they slept in certain places and on  worn plastic pet bottles that were chewed up by the snow leopard kittens that had played with them as toys. Snow leopards seem to regularly come onto the Karakoram Highway, which makes for easier paths to travel at night and in the early morning hours when there are no cars around. 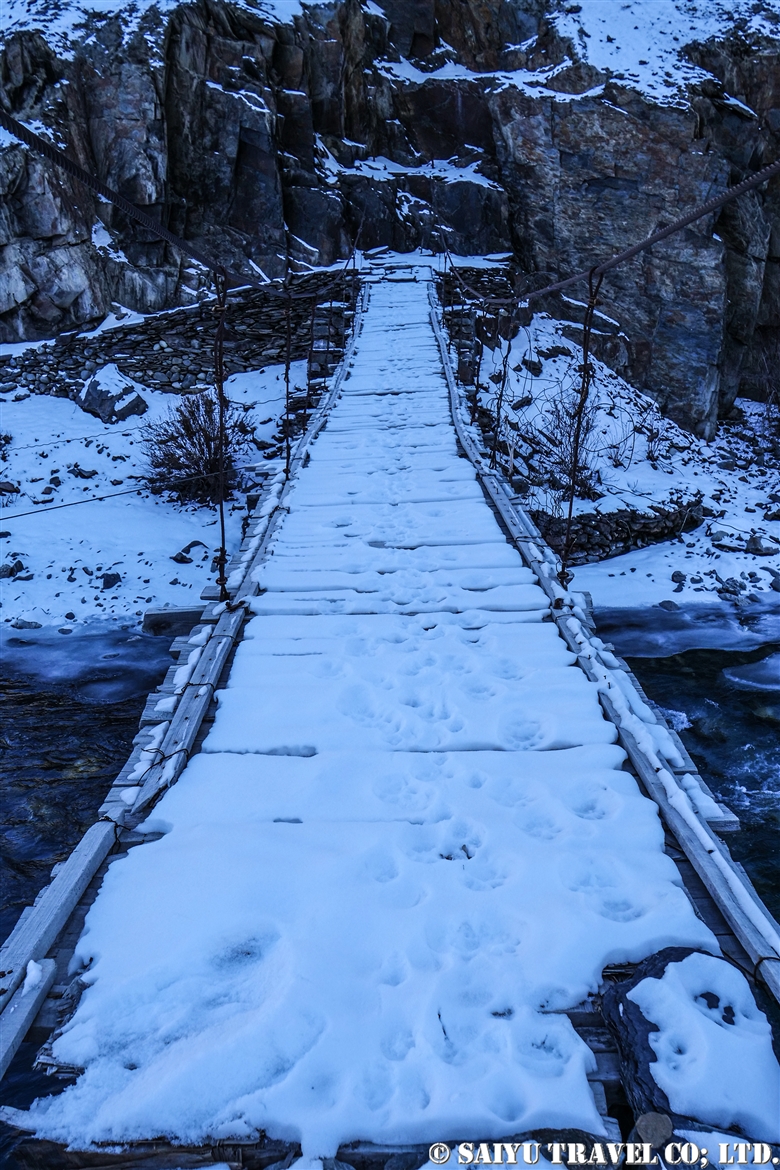 A suspension bridge covered with snow leopard footprints! Snow leopards can cross the rivers in narrow or frozen areas, but of course if there is a bridge, they will not hesitate to use it.

Around noon, as we were traveling along the Karakoram Highway, the guide suddenly shouted “Leopard!” And promptly stopped the car and got out. Staring out at the landscape saying “Bismillah, Bismillah (In the name of God),” and right there, was a snow leopard. 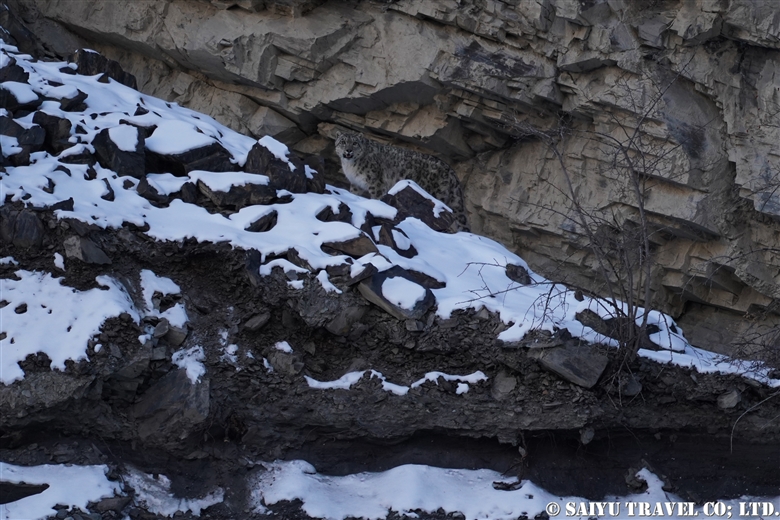 It was sitting on a rock just off the road, but as soon as it saw us, started walking away.
The guide is delighted with “Shaubashi, Shaubashi (Wakhi language meaning ‘Very good’ or ‘Well done’.) The pressure on the guide of trying to see a snow leopard, was released. 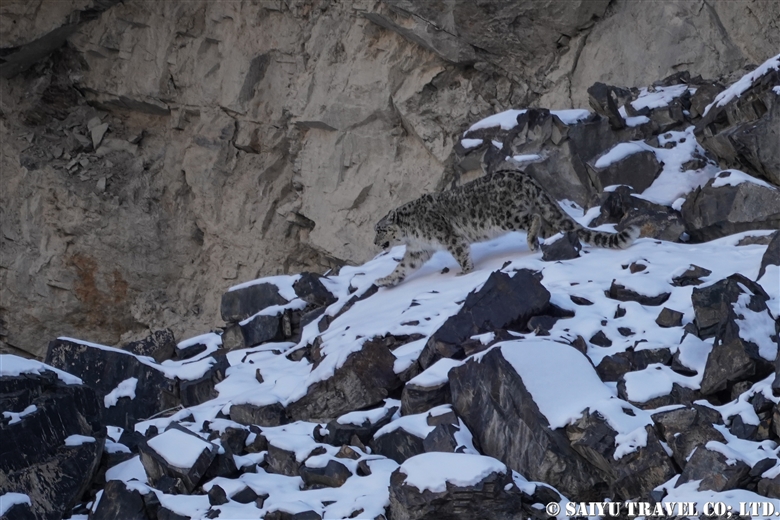 Even though we saw it, the snow leopard was so fast and it was difficult to catch a photo of it as it walked away. At 3,300 meters above sea level, we were so excited and became short of breath. As we took the photos, our hands were shaking, not sure if the photos would come out. 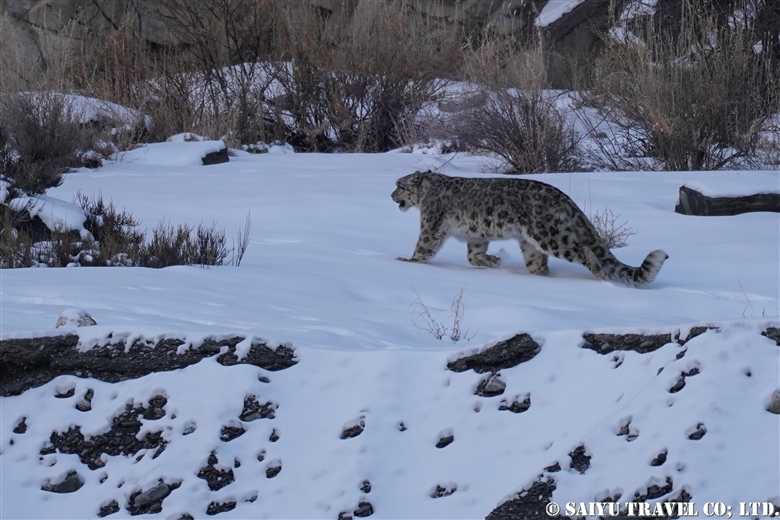 A Snow leopard, actually walking, in the snow. So often, Snow leopards are observed amongst rocky backdrops, so it was nice to finally be able to observe this snow leopard with the white snow, which it was named after. 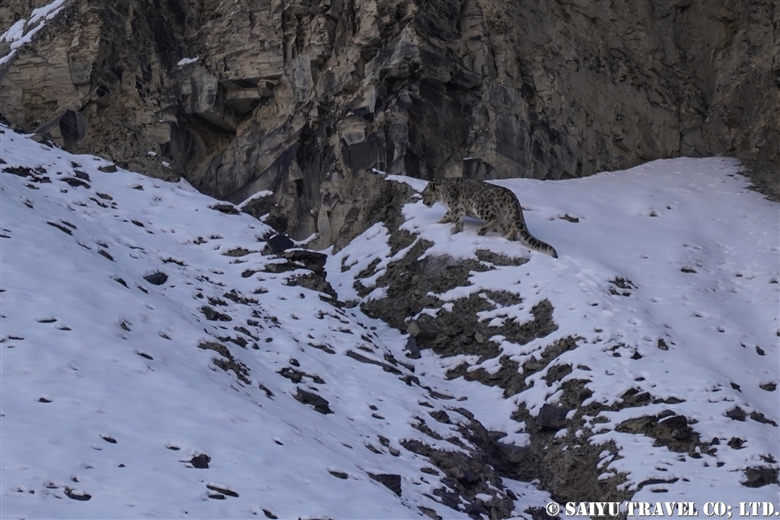 It climbed higher and higher, getting smaller and smaller. 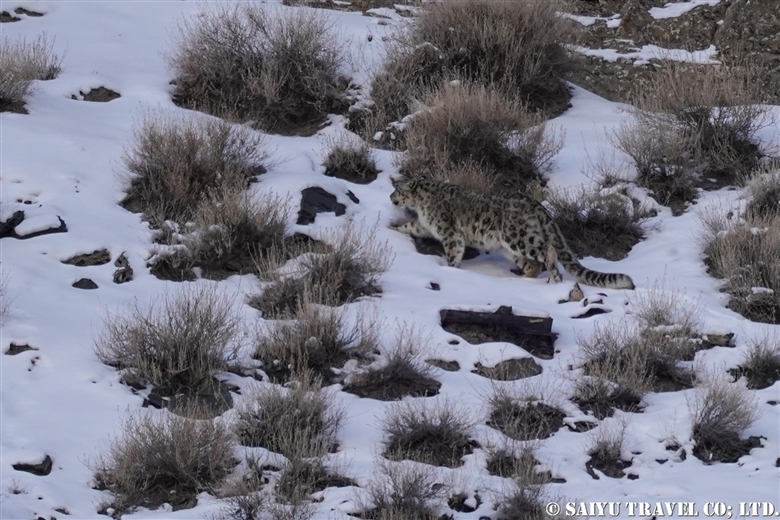 It continued moving further away. There were times when it overlapped and camouflaged with the tufts of grass, making it hard to find in the viewfinder. 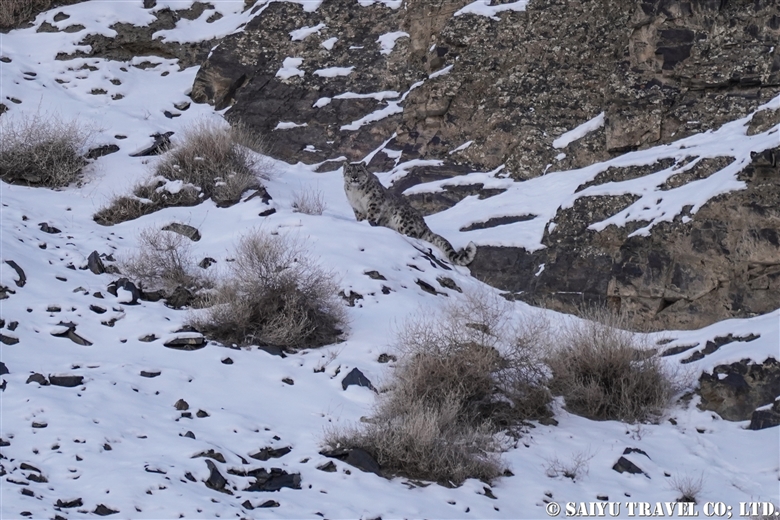 He showed me his face for just a few brief moments. This is the last photo. It started walking into the rocky area and soon disappeared. 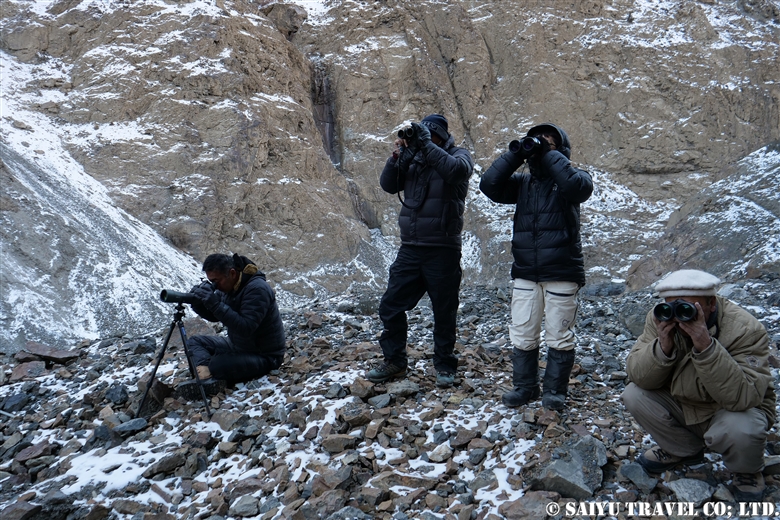 The group as we watched this snow leopard until the very end. 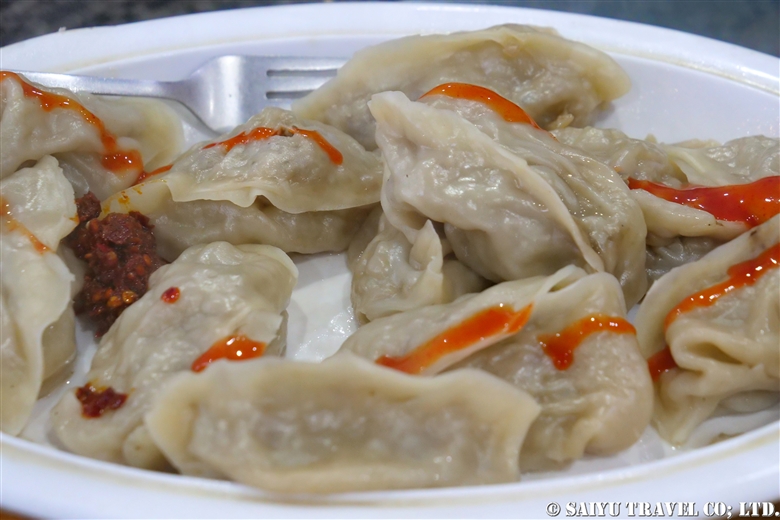 We returned to Sost at 2:30 pm for a late lunch. This day was a celebration for the guides (but no alcohol!). A buffet of different kinds of yak meat. All enjoyed a fusion of yak meat recipes, such as yak mantu (Xinjiang Uighur Autonomous Region, which borders Sost, Central Asian cuisine) and yak nihari (a dish of the Indian subcontinent that is stewed with beef parts and the bone marrow).