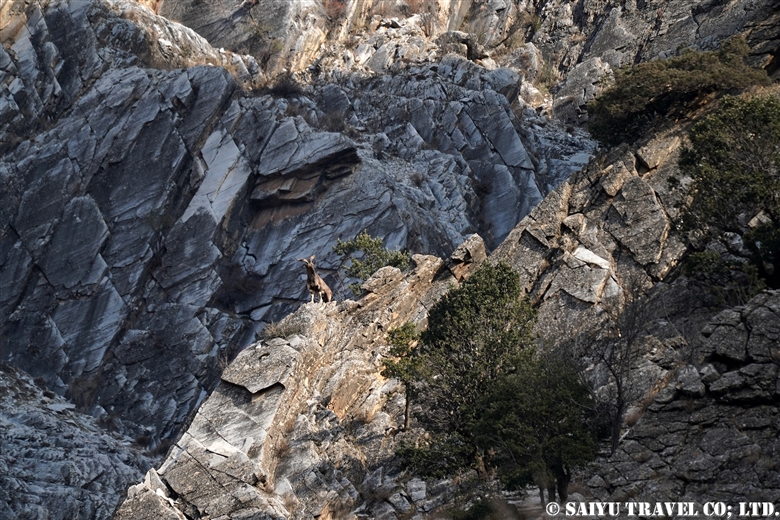 We visited the Gahirat (Gehret) Goleen Conservancy, just southeast of Chitral, to observe some Markhor.
Compared to the protected areas of national park where you can observe Markhor near Chitral, the valley here is narrower and the steep, rocky mountains are very impressive, making it a beautifully scenic valley. Like the Tooshi-Shasha Conservancy, it is under the control of the community of surrounding villages and only one Markhor per year can be taken for trophy hunting. 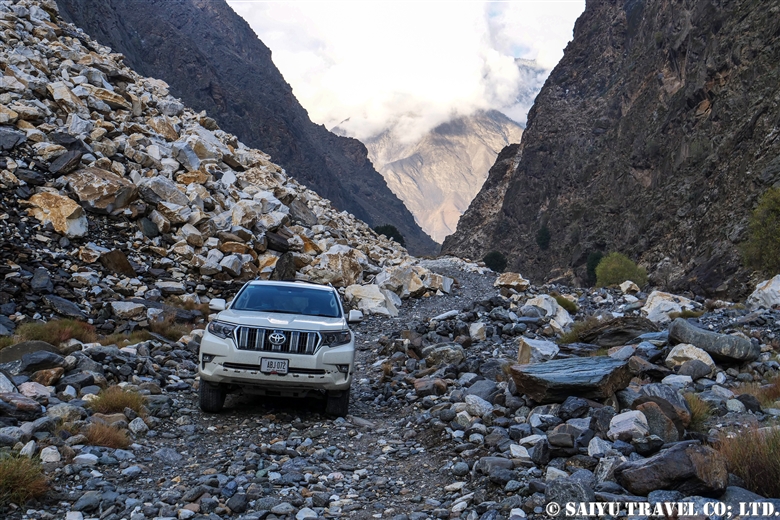 Moving away from the main road along the Chitral River and entering the conservancy, the condition of the road is horrible. Along the way, we passed through mountain of marbled rocks and crossed a small stream. 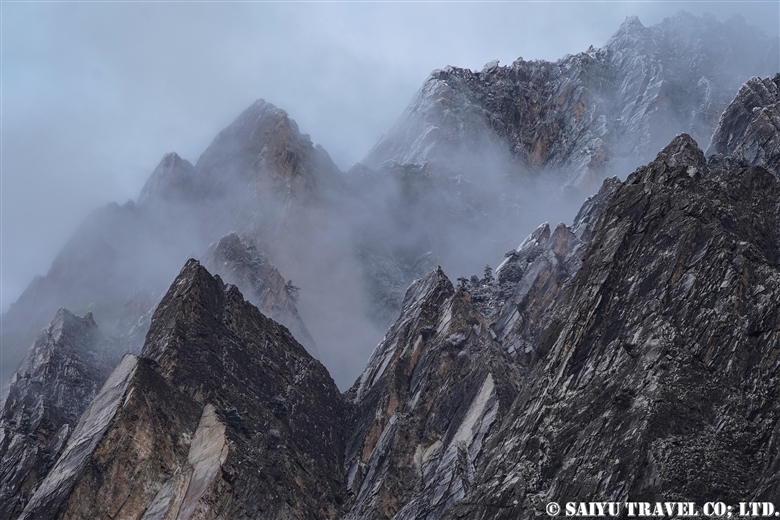 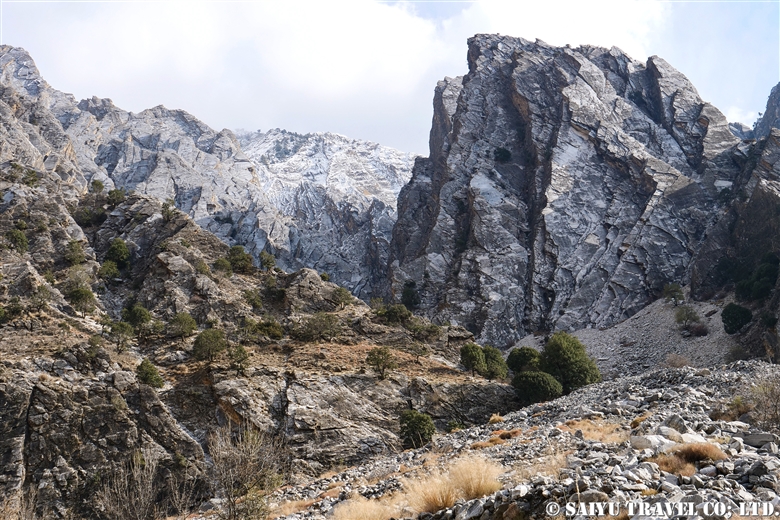 The Gehret Goleen Conservancy is a 95,000-hectare community reserve founded in 1998. Surrounded by steep, rocky mountains the sparse vegetation on the slopes include the holly oak (Quercus ilex), the Himalayan  cedar (Cidrus deodara), and the Chilgoza pine (Pinus gerardiana). 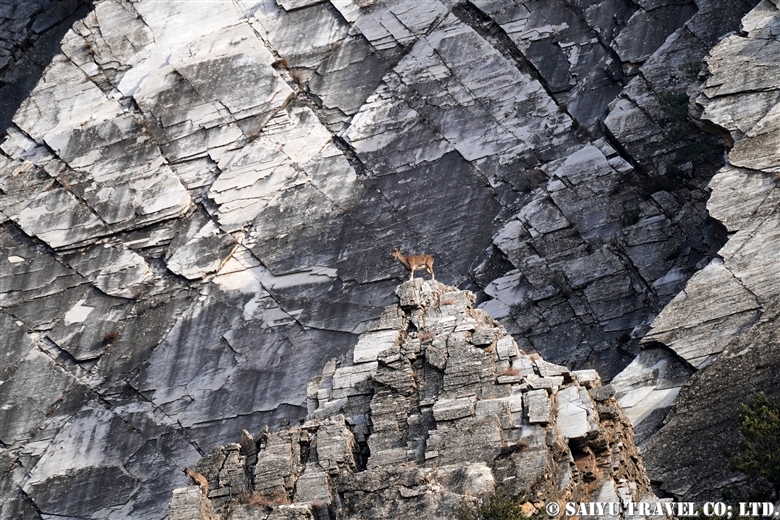 A female Markhor appeared against the backdrop of the rocky mountain. I caught myself thinking “Oh, if only this could be a male with big horns, that would have been nice!” … it is such a picturesque landscape. 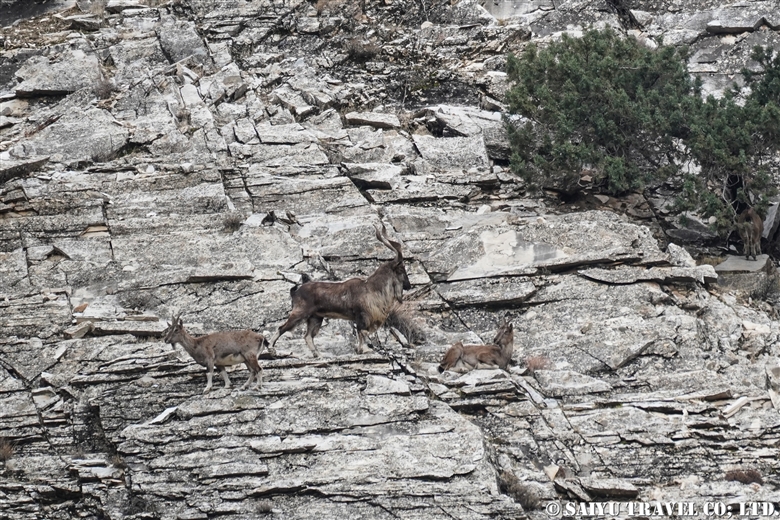 A male then appeared in search of females. Markhor males seen during this season continue to search for females in estrous.
The size of the Markhor herd in the Conservancy was as small as 10-21 head, compared to 25-57 individuals in the Tooshi Shasha Conservancy, which may be a sign of just how tough the rugged environment is here. 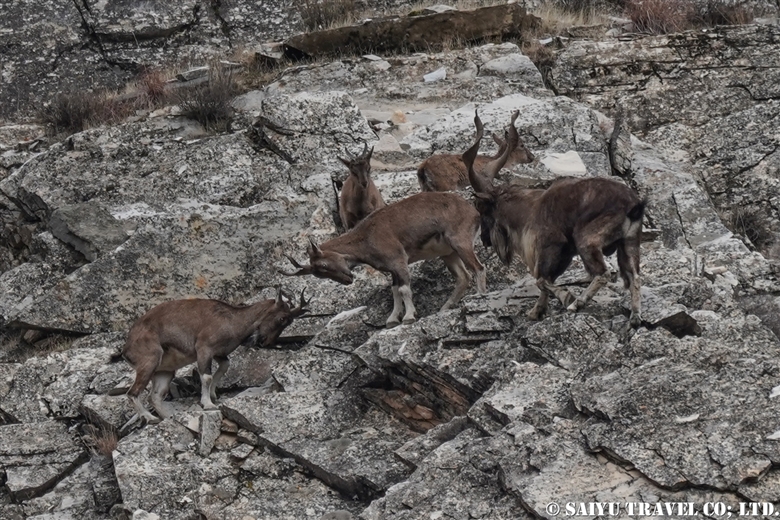 The young males also practice battling with their horns. This is an interesting season to see the sight of males chasing herds of females in heat. 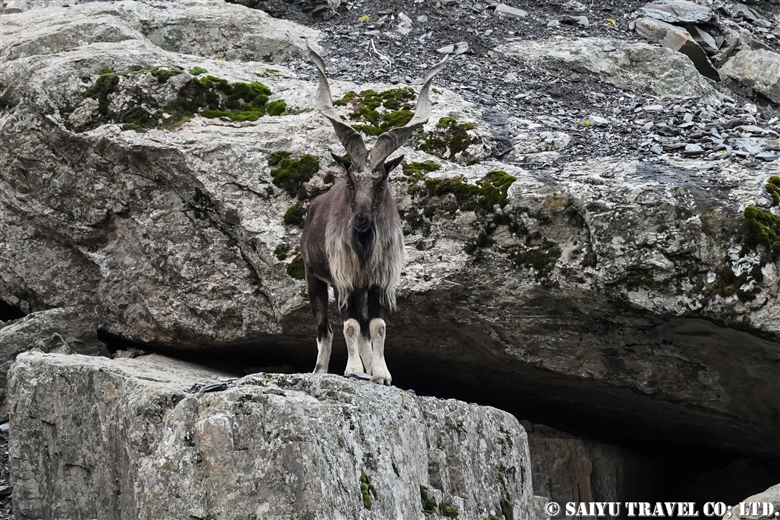 The Markhor belongs to the genus Capra, (pronounced mārkhor) and is the world’s tallest goat family in the genus.
The male markhor is known as the “King of the Horned Animals” as well as “King of Goats” which seems to be an irresistible draw to the niche of ‘Fans of Horned Animals.’

Inhabiting western India and central Asia, most markhor are found in the core zone of the mountainous region of Pakistan. At one point, poaching greatly reduced the population, but as of 2020, the population seems to be making a recovery thanks to efforts to control trophy hunting and reduce illegal hunting. 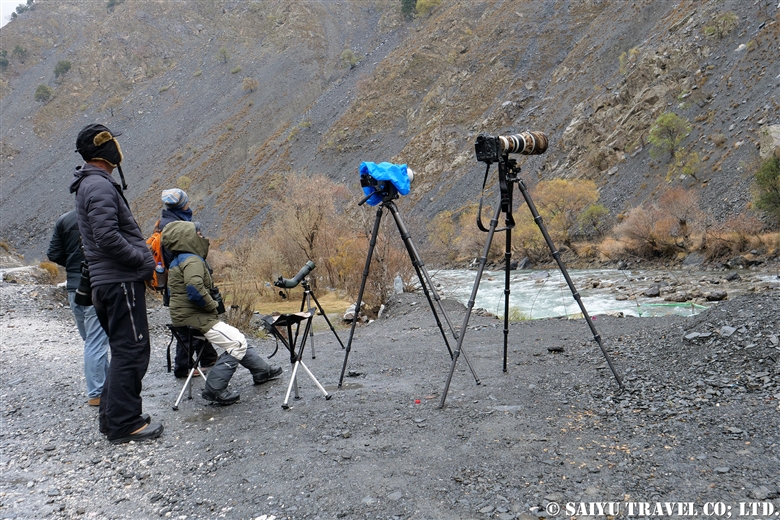 Visiting the Tooshi-Shasha Conservancy, we were lucky to get a good view of markhor just on the other side of the river.
The Tooshi-Shasha Conservancy, established in 1979 with 1,045 hectares, was expanded in 1998 to 20,000 hectares, as a community-managed reserve by the surrounding 7 villages. Unlike national parks where hunting is prohibited, it is a managed area where limited hunting is permitted.
In Pakistan, normally wild animals will flee at the sight of humans, due to having been hunted, but it was possible to view them quite closely in the Conservancy. 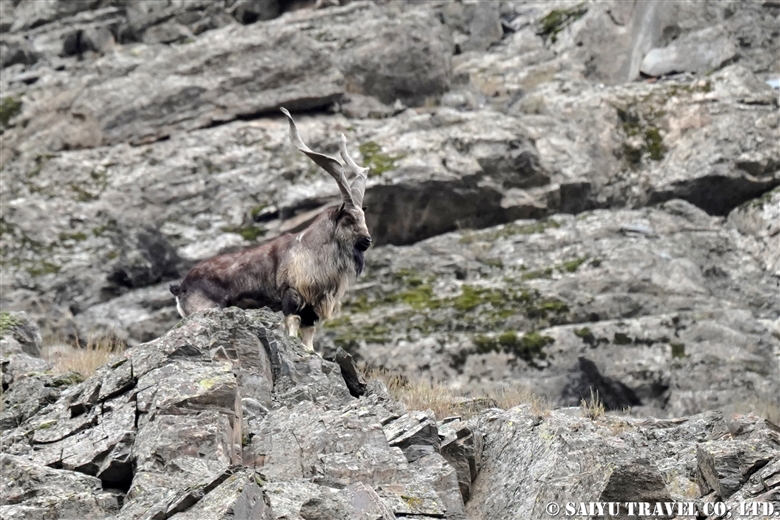 This is a male markhor. The ones seen in this area are a subspecies called “Kashmir Markhor.” In the northern part of Pakistan, there is another subspecies called the “Astor Markhor.”
The male here has a nice set of horns. In this season, they will come to lower elevations in search of mating opportunities with females. 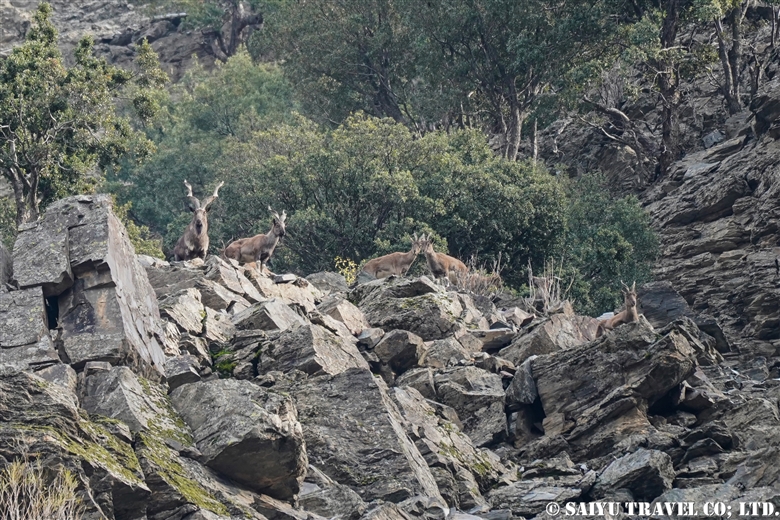 A herd of Kashmir markhor. Normally herds only have females and juvenile males but during this season, adult males can be seen with them. 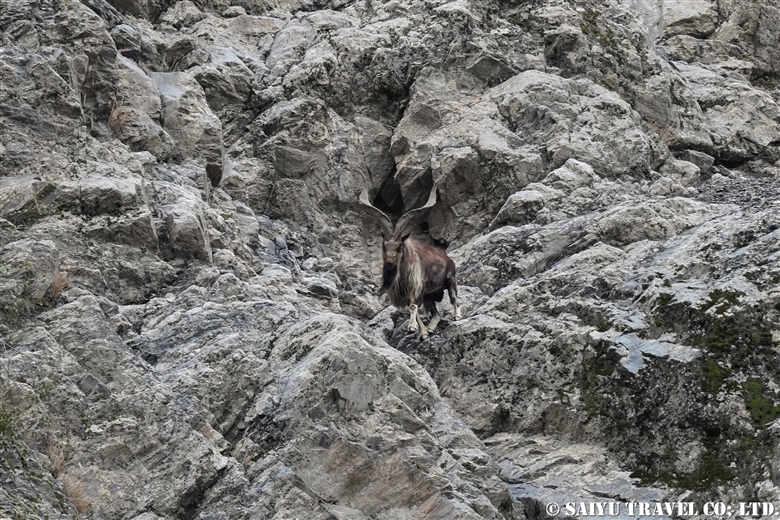 Coming down the mountain.

He was getting very close. The male’s horns can reach up to 160 cm (63 inches). Females can also have horns, but they only grow to 25 cm (10 inches) in length. The females are also remarkably smaller in body size as well. 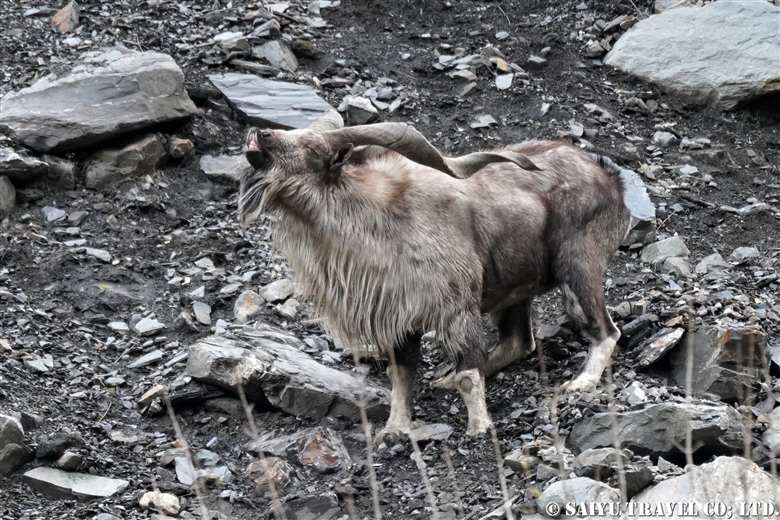 The male will raise his upper lip, sticking out his tongue…It seems this flehmen response is a reaction to the females in estrus.

The markhor’s breeding season is also sadly the same as hunting season for the rich trophy hunters. The hunting permits are auctioned to the highest bidders to wealthy hunters who aim to get these big-horned trophies for their collections.

In 2020, the year of an unprecedented pandemic, we had heard that the auctions went ahead and permits were already sold. But there was a big question if the hunters would show up or not! The day after we left, we heard that they did arrive from overseas to claim their permits. In the 20,000 hectare Tooshi-Shasha Conservancy there are an estimated 1,400 markhors (2015 population survey data) so every year 2 are allowed to be taken by the trophy hunters.

The Kashmir markhor are auctioned starting from 9,000 to 10,000 US$ and from there the permit is awarded to the highest bidder. Most of these proceeds (about 80%) are returned to the community, such as for schools and health care for the villagers. .

These 2 hunted markhor are therefore quite important sources of income for the locals and directly connects back to the conservation and management of these endangered wildlife. This is a model that modern Pakistan has which promotes the “Coexistence of Humans and Wildlife.” 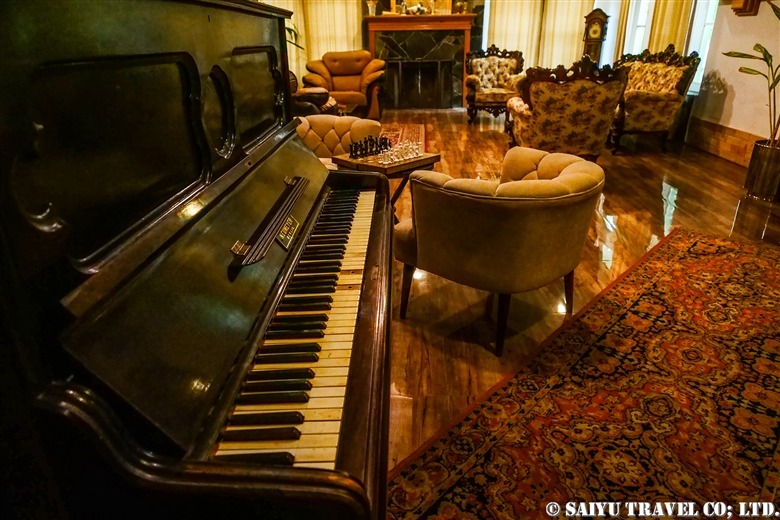 A lovely place to stay …  a  hotel introduced by a hunter acquaintance for the observation of Kashmir Markhor, Gahirat Castle Hotel 1912.

There are several hotels in the Chitral area that belong to the former Chitral princely state. Gahirat Castle 1912 is one of that and it has a private game reserve of 95,000 hectares, where about 700 Kashmir Markhors live. In the morning and evening, you can see Hindu Kush’s highest peak Tirich Mir 7,708m from the vicinity of the Gahirat Castle. The perfect view beyond the wide Chitral Valley. Gahirat Community Game Reserve—It is in a mountainous area, upstream of the Gahirat River. It’s vegetation is an ideal environment for Kashmir Markhor and the valley is narrow which is suitable for our observation as well. A female Kashmir Markhor continuously looking at us.

In 2009, when the current owner began protecting Kashmir Markhor, the game reserve had only about 60 Kashmir Markhor.   Consequently through protection in accordance with the rules of trophy hunting and enforcement of laws against illegal hunting, it is said that number has increased to about 700 as of 2019.

Trophy hunting at the Gahirat Community Game Reserve has a quota of one Kashmir Markhor per year.  The amount of shooting permit from the government starts from about USD 100,000 (It is a surprise).  This is a system in which a hunting company drops it at an auction and sells it to customers. Most of this revenue is returned to the community. Nine gamekeepers were cracking down on illegal hunting for one trophy hunting in this game reserve. Official trophy hunting began in 2000 at Gahirat Community Game Reserve, and there are 18 records by 2019.  The trophy hunting is limited to those old males with more than 40 inches horns.

The Kashmir Markhor displayed in the hotel’s living room is the trophy of the current owner’s grandfather, with 58 inches horn, the third-largest Kashmir Markhor trophy in the world.

To be honest, I don’t accept hunting or trophy hunting but I think it’s much better than the time when illegal hunting was rampant, encouraging local residents to understand conservation even the purpose for Trophy hunting. Finally, when you come back from the Game Reserve, Gahirat Castle 1912 is a wonderful place to stay.  When you enter the building, you will be greeted by the historical heritage gems. At 6:30 in the morning, you can hear the birds chirping. A blissful moment to go out in the middle of the garden and observe the birds.
I observed a good number of Himalayan Bulbul, White-eared Bulbul, Blue-whistling Thrush, Great Tit, Eurasian tree sparrow, Bank Myna, Streaked Laughingthrush, etc.
A great stay in nature, the Gahirat Castle 1912. 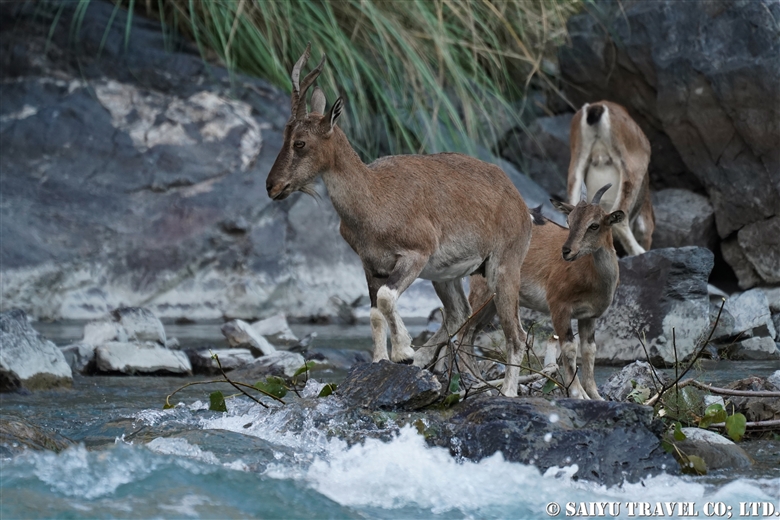 In the mountainous and rugged area near Chitral, there are several places where Kashmir Markhor can be observed.

Markhor is the national animal of Pakistan. There are 4 subspecies; Astor Markhor, Kabul Markhor, Kashmir Markhor, and Suleiman Markhor inhabited in Pakistan.
Indeed, Pakistan is surprisingly a country with a plethora of Markhors. In theTooshi-Shasha Conservancy, on the other side of the river along the way to Garam Chashma (hot spring) from Chitral, several groups of Markhor come to drink water from the river in the afternoon.

During this tour we observed a female Markhor and her kid very closely from the river side. But, only female and kid… Where is male?
Males spend most of the year  high on the mountains and they descend to low altitudes for mating in month of  December. Markhor not only comes to drink water, but also to eat the leaves and bushes that grow on the river bank. Both mother and kid are standing on hind legs & eating. Yes, you have to eat well before the harsh winters start!

During the visit, we did not get information about number of Markhor  in the Tooshi-Shasha Conservancy. But at at the Chitral Gol National Park nearby, it is said that the number of Markhor has increased to about 2,500.

In fact, I was able to meet Kashmir Markhor easily both in Tooshi-Shasha Conservancy and Chitral Gol National Park. Next time I would like to see “the male Markhor”.