I will introduce photos of the rock paintings I came across during my November 2021 visit, traveling along the Indus River. This blog will be broken up into several parts to cover the many different things I saw.

In northern Pakistan, on the banks of the Indus River -from Shatial to Hunza, there are said to be more than 50,000 historic rock paintings that remain. These rock paintings mark the places where travelers crossed the Indus River, as they traveled along the Silk Road. When the Indus River waters were too precarious, travelers were forced to wait on the banks until the water levels fell enough to be able to make a safe crossing. While they waited, these carvings in the rocks were made by the various travelers, pilgrims, and merchants who were from all over. Most of the themes of the pictures relate to Buddhist traditions, but there are various motifs of animals (such as Ibex ,snow leopard) carved perhaps before Buddhism passed through this area. There are various ethnic groups represented based on the written languages as well, such as Kharosthi, Sogdian and Brahmi engraved.

A modern bridge crossing over the Indus RiverWith most of the regular sightseeing tours being lead to Hunza and in this area, due to strict travel restrictions on the times allowed between destinations, you cannot take much time to make stops to see the rock art along the Karakorum Highway, as you could in the past. Last year, I made a research tour in November, taking time to stay in Chilas for a few nights, allowing me time to take leisurely tours of the riverbank to inspect and record the rock art I saw.

There are many places outside of Hudur where you can see many pagodas depicted in the rock art, probably made during the Kushan Dynasty in the height of Buddhism being spread across many different regions, and the various people who came from all over, as they travelled along the Silk Road.

A person holding a piece of armor in his left hand and a hunted animal in his right hand. This type of design, in which a person is drawn facing straight forward with the objects held in both hands held high, is one that has long been used in West Asia.In Gichi, just 10 minutes east of Hudur, there were many rock paintings of pagodas. Perhaps this is because many Buddhists stayed there, or because these relics were left untouched in the area.

In Oshibat, located about 10 minutes further east of Gichi, as soon as you get off the bus, you can see rock art scattered here and there. There were many there, but each one was very interesting and aroused my curiosity.

On the lower right side you will clearly see the long-horned Ibex, and then to the left side, perhaps a hunter who is chasing it, looking very dynamic and looks like they are running.

I’m not sure if it’s out of pure boredom, just waiting for the river water to go down, perhaps it is an old type of graffiti being carved, or perhaps it has a more mystical meaning. It is unclear.

Painted with what appears to be a tool of some sort, this figure has a Greek-hairstyle and is painted in a Greek-style.

Drawn with the face in a side profile, the heavily emphasized eyes, the long fluttering hair and the type of wear that is similar to the image of Alexander the Great (in the next image).

This mosaic of Alexander the Great (Historical Museum of Sughd, in Khujand, Tajikistan) riding his steed Bucephalas.The next photo is of rock art that is located only 5 minutes by bus from the Shangrila Hotel, where I stayed in Chilas. I have visited this site on general sightseeing tours to Hunza and nearby locations many times before. But when I took more time to look around, I found a very detailed and expertly carved pagoda designs.

All of this rock art will sadly, be destined to be flooded by a dam, which is going to be completed around 2027. Some rock paintings will be relocated and preserved, but most of the more than 50,000 pieces, will be left behind and submerged by the river. I would like to continue to introduce you to the precious rock art that will be lost in the next installments of this blog. 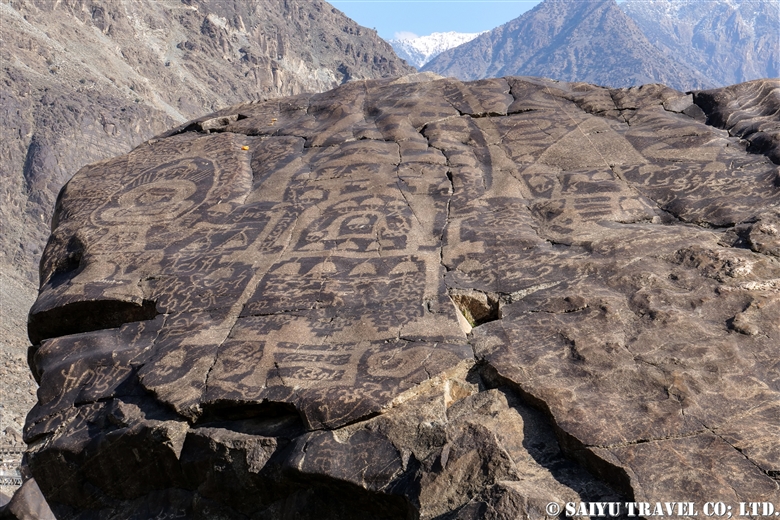 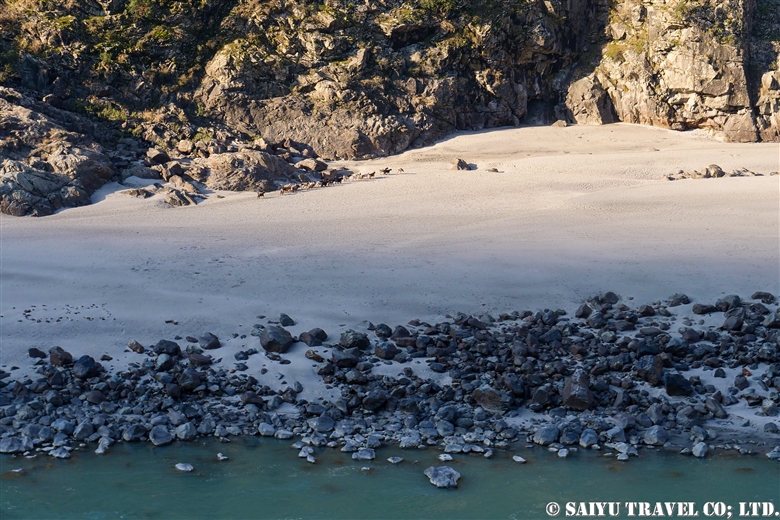 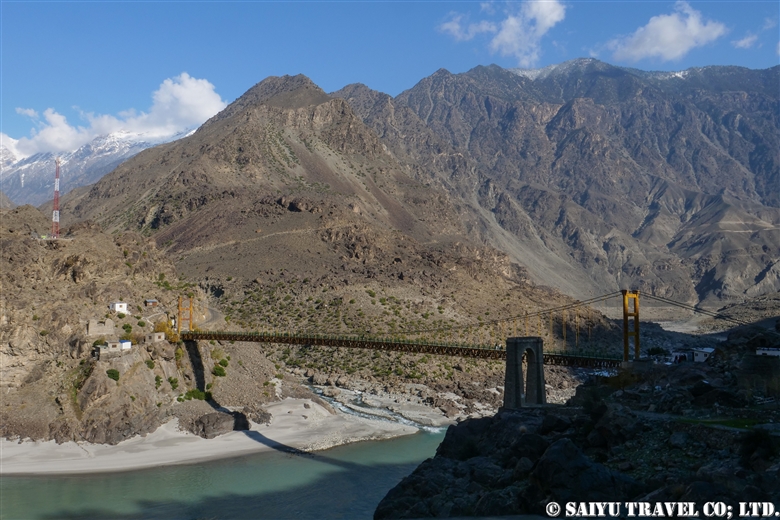 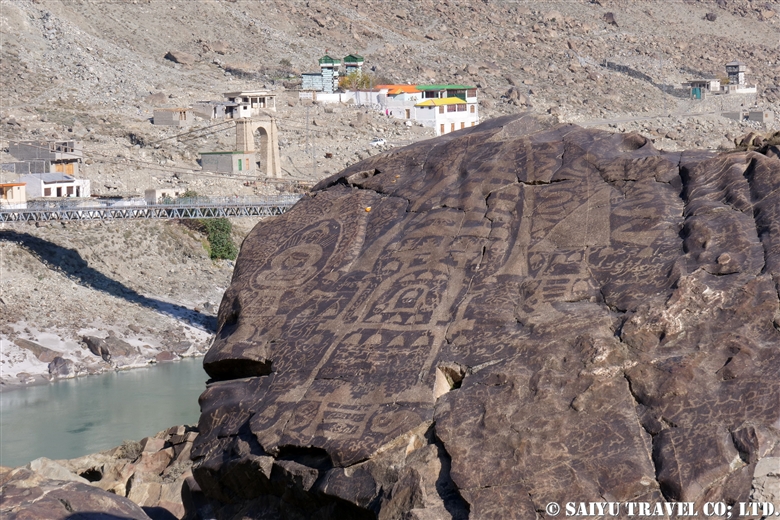 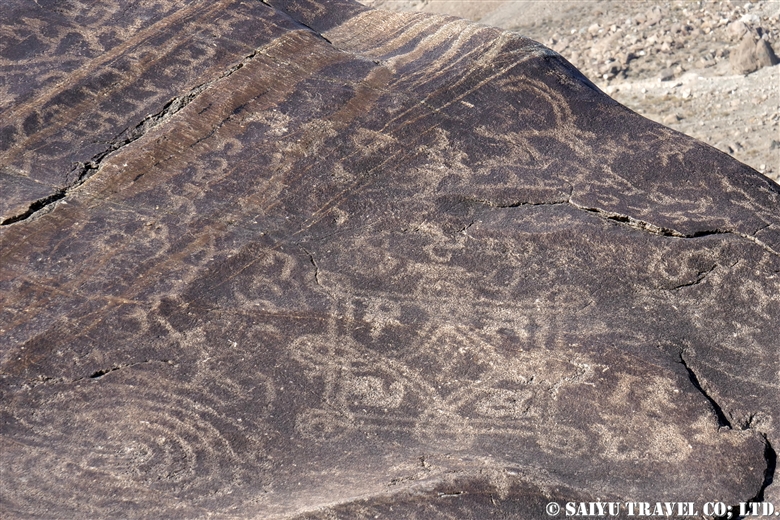 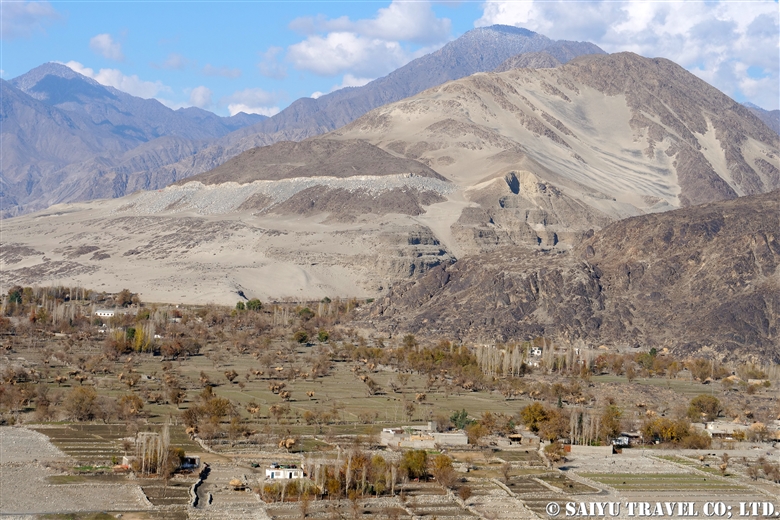